The iMinds testbed is composed by two different networks nodes that are used to control the both data-plane and control-plane and a big node of computer resources (+100 Physical Servers) that are managed by the VirtualWall manager (Emulab). Inside the Virtualwall we can find the different servers that are used to deploy the multiple components of the FELIX project and all together conform the iMinds island.

Deploying an openflow switch like OpenVswitch inside the Virtualwall infrastructure permits to create new flows between different virtual machines since all network and computes resources are already physically connected makes it very easy to do changes.

For the control-plane is used the former VPN network created for the OFELIA project, that already had interconnected different openflow islands around the EU site. The network links to the other islands that are directly connected to iMinds testbed uses 3 different type of services over 3 different links; Geant Plus, Geant BoD and OpenVPN: 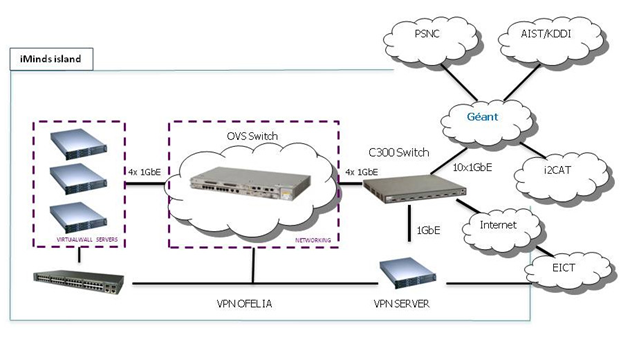